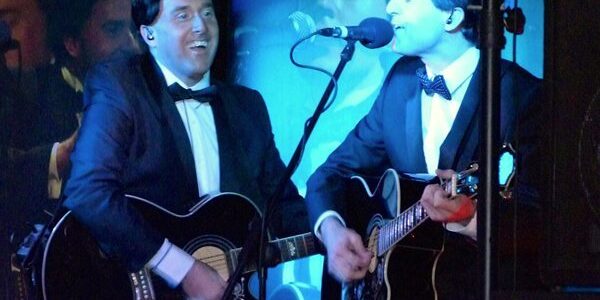 The Temple Brothers are bringing their hit tribute show the ‘Everly Brothers and Friends’ to the Thwaites Empire Theatre on Friday, 9th September.

With their close harmonies and distinctive guitar playing, the Everlys progressed from the Grand Ole Opry and American skiffle to become the vanguard of American pop in the 1950s and 1960s.

They had a great run of top-10 hits, including Bye Bye Love, Wake Up Little Susie, All I Have to Do Is Dream, Claudette, Bird Dog, Problems, (‘Til) I Kissed You, Cathy’s Clown, When Will I Be Loved, Lucille, Walk Right Back, Temptation, Cryin’ in the Rain and The Price of Love.

Paying tribute to the Everlys are real-life brothers Colin and Steve Temple who have been performing together in various formats for more than 20 years.

Starting out at an early age with Colin on guitar (aged 11) and Steve on drums (aged 13), they formed a duo called Midnight Dynamos and discovered that they had a talent of harmonising when singing together. Some years later – and having become a hit on the rock ‘n’ roll circuit – the two brothers decided to focus on the music of the Everly Brothers.

Their vocal emulations of Don and Phil Everly are near-perfect, complemented by their adept guitar playing. The pair sport a clean all-American look, with their sharp Ivy League suits, creating a wonderful salute to the Everly Brothers.

The Temple Brothers are at the Thwaites Empire Theatre on Friday, 9th September at 7.30pm. Tickets are £15 and are available here or call the booking office on 01254 685500.